The lower limb and knee account for >75% of musculoskeletal injuries in today’s military.

Osteoarthritis is among the leading causes of disability in the United States, costing billions of dollars each year in lost work hours, treatments, and doctor visits, and leaving people sidelined from day-to-day activities.

That problem is mirrored and amplified in the military, a unique segment of the population that relies heavily on physical fitness and ability. “OA is the leading cause of disability discharge from the military,” said Kenneth Cameron, PhD, MPH, ATC, FNATA, director of Orthopaedic Research at Keller Army Community Hospital, West Point, NY. Indeed, the lower limb and particularly the knee account for more than 75% of military-related musculoskeletal injuries.

The armed forces are particularly affected by osteoarthritis, and disease often strikes soldiers earlier than it would civilians. However, management and treatment are hampered by the same information gaps as in the general OA population. Despite the urgency of the problem, which increases daily due to multiple deployments, research focused on military-specific osteoarthritis remains underfunded—even though successes in that sphere could translate out into the civilian population.

“We need to do a better job ensuring people can stay in their jobs,” Cameron said. “Anything the military does will be relevant to the general population.” 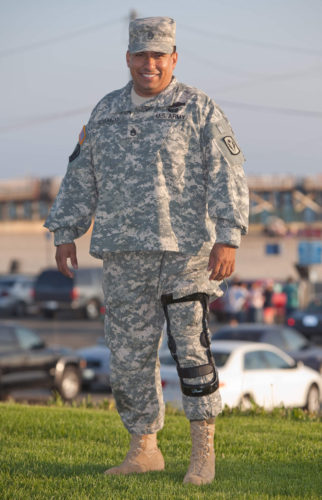 Between 1999 and 2008, 108,266 cases of physician-diagnosed osteoarthritis were documented in the Defense Medical Surveillance System,1 which collects health-care data in the military. Just as in the civilian population, the rate of OA increases as service members get older, according to an analysis published in Arthritis & Rheumatology in 2011,1 and enlisted service members, who have more physically demanding positions, were at a higher risk of the condition. Overall, the military had nearly twice the incidence of OA compared with the general population, making OA a potential threat to military readiness.

The rate of OA remains higher than average among veterans, with 32 % of veterans reporting doctor-diagnosed arthritis, compared with 22 % of non-veterans, according to a 2006 study of nearly 125,000 adults surveyed through the Behavioral Risk Factor Surveillance System.2

The physical requirements of military service likely contribute to the high rate of OA, said Michael Langworthy, MD, US Navy Reserve Captain and chief of orthopedic surgery and sports medicine at Southcoast Health in New England. Service members face stringent fitness requirements, so obesity and carrying excess body weight—a well-known risk factor for OA3—is not generally a concern. “But the average sailor deploys wearing body armor,” Langworthy said. “That can weigh anywhere from 70 to 100 pounds.” That load, he said, puts pressure on the joints in the lower body, similar to what obesity does.

A significant percentage of OA developed by soldiers and veterans is likely posttraumatic OA, which develops following acute injury, such as an anterior cruciate ligament (ACL) tear or ankle sprain. The high rate of lower-extremity injury during recent military conflicts contributes to the problem, Johnson said. Research also shows that traumatic injury progresses to OA at a higher rate in the military than it does in the civilian population: approximately 28 % of injuries resulted in arthritis, according to a 2013 analysis, compared with 12 % in a general population.4

Nearly all cases of posttraumatic OA could be linked directly back to a battlefield injury, and joint damage progressed rapidly to disability in injured soldiers. “There was an average of 19 months from injury to when they were no longer fit for service,” said Johnson, who was a coauthor of the study.

An injury on the battlefield, then, has a high risk of sidelining soldiers quickly, during the time when they might still be otherwise able to be actively serving. Intervening to prevent or treat OA more effectively means that the armed forces can continue to employ and rely on more people who they’ve spent money and time training, Cameron said. “And they can continue to do the job that they want to be doing,” he said.

Heavy loads, such as body armor, heavy boots, backpacks, and weapons, affect movements of the knee in military service members, and might contribute to injury risk or osteoarthritis (OA), according to several studies represented at the recent 41st Annual Meeting of the American Society for Biomechanics.

Carrying a medium or heavy load (defined as 15% and 30% of bodyweight, respectively) affected knee-joint movements of male soldiers during a run-to-walk task but not during a walk-to-run task.1 The deceleration from run-to-walk caused soldiers who were wearing medium or heavy loads to exhibit significantly increased knee abduction and internal rotation, which might increase risk of injury and knee instability. The authors called for additional research to identify biomechanical strategies that might help soldiers avoid risky movement patterns and protect against injury during deceleration.

Exhibiting varus thrust, a biomechanical feature in which the knee bows out laterally during the weight-bearing portion of a step, puts people at increased risk of knee OA. Adding weight burden, which also increases risk of knee OA, to soldiers with this walking pattern is therefore a potential concern. However, in research discussed at the 2017 American Society for Biomechanics annual meeting, and subsequently published in the Journal of Biomechanics,2 adding a body-borne load actually reduced thrust in 9 military personnel who presented with it initially (one half the study sample). Nine military personnel without vagus thrust, however, adopted a walking pattern that were related to risk of OA, such as thrust and knee abduction, when carrying a load.

Current research underscores the complex relationship between added load and changes in biomechanics, particularly in the knee. Authors on both studies1,2 stressed the need to develop intervention strategies that might reduce movement patterns linked to the development of osteoarthritis for service members.

Treating OA in the military is no different than the challenge facing civilian clinicians. There simply aren’t many treatment options for OA outside pain management and, eventually, joint replacement.

In younger service members, like many soldiers who develop joint problems early, choices are even more limiting and difficult. “You’re really trying to navigate, how do I keep working, and manage this best I can, because I’m too young for a joint replacement,” said Kelli Allen, PhD, health services researcher at the Thurston Arthritis Research Center, University of North Carolina at Chapel Hill. “Ideally, you catch it early, and try to aggressively manage it.”

However, identifying joint problems early is still a major challenge. Even if interventions were to come online, Cameron said, they’d be useless without a way to measure joint health and track the progression of OA as it’s developing, not just once it has become a problem. “Research needs to be focusing on how to identify people earlier in the progression of the disease,” he said.

That’s particularly important for posttraumatic OA. At this point, Cameron said, there’s an enormous time gap between an injury such as an ACL tear and development of OA, in regard to making contact with a physician.

“Right now, if you tear your ACL, you’re treated, and in 6 or 9 months you’re free to go. But we know that you’re at a very high risk for OA, and it will probably happen within 10 years,” Cameron said. The way physicians manage posttraumatic OA today, he explained, would be like taking people with hypertension, who are at an increased risk of heart attack, and saying that they don’t need to come back in until they’re actually having a heart attack—without providing intermediary treatment.

“From the OA perspective, we do that. We do that because we don’t have a way to monitor joint health during that period,” Cameron said. “We need to change the way we’re thinking and engage earlier in the process.”

Because the military has robust injury tracking and oversight capacity, it might be particularly well-suited to investigate questions around the progression of posttraumatic OA. The military population, where OA is known to appear earlier, also provides an opportunity to observe the disease in younger service members and allows researchers to understand the way OA manifests and should be managed in that group, Langworthy said.

“In the US, the fastest growing group is people from 45 to 55 [years of age]. They’re in the prime of their working lives,” Langworthy said. “If they have bad hips, and bad knees, they can’t go to work. Research and interventions that occur in the military can translate well to that.”

Although the military is well aware of the problem OA poses to military readiness and has a ready and well-documented population for research, funding dollars from the US Department of Defense for studies on the armed forces are often scarce. Department of Defense funding is distributed by Congress, and the pot of money is open to all researchers—not divided by disease.

“We’ve only just started to allocate research funding in the last few years,” Cameron said. “It’s become more of a priority. But it’s still a challenge because the dollars are congressionally allocated, and there’s no specific funding mechanism for osteoarthritis. We’re competing with 40 or 50 other disease categories.”