Athletic trainer Alejandro “Arod” Rodriguez was looking to build a system at Stephen F. Austin University to better manage the post-injury management process for the school’s student-athletes. He wanted to know what each specific athlete looked like when they were healthy so he could better inform their return to play. He quickly realized what he needed was objective, reliable data on all of the school’s athletes so that he could know exactly how each athlete was progressing instead of simply relying on standardized time-based rehab recommendations of the past. That’s when he contacted IMeasureU. 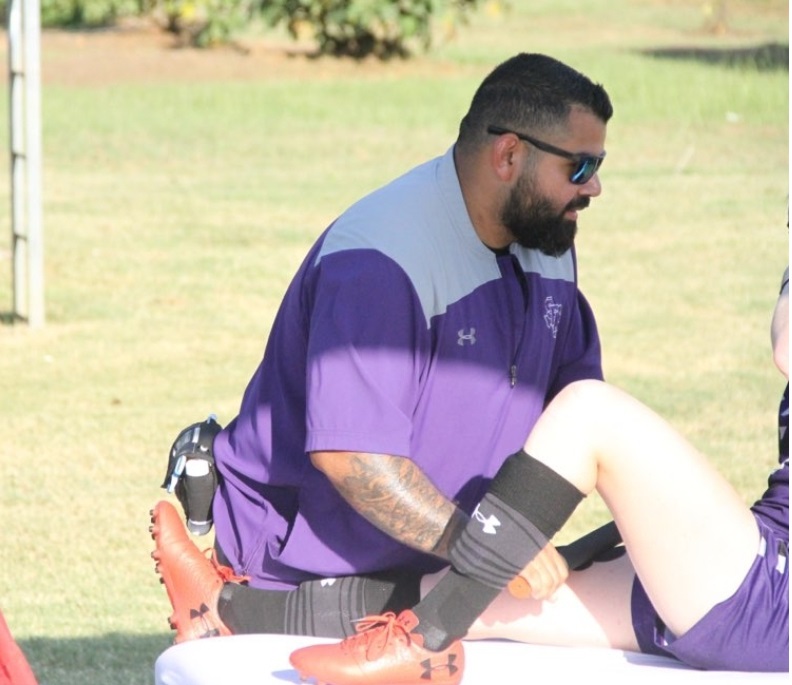 “Here at Stephen F. Austin, we were looking for a solution that would give us objective data that would help us track our athletes as they started their return to performance journey,” Arod explained. “We had had injuries in the past and had developed some pretty robust systems to get them back out on the field. However, we felt that we were lacking a layer of detail to give us complete confidence that the athlete was where we thought they were. We have a number of tests that we administer right before athletes go back into practice and we wanted deeper insights on how they performed the tests. We wanted to bridge the gap between the test and what goes on on the field.” 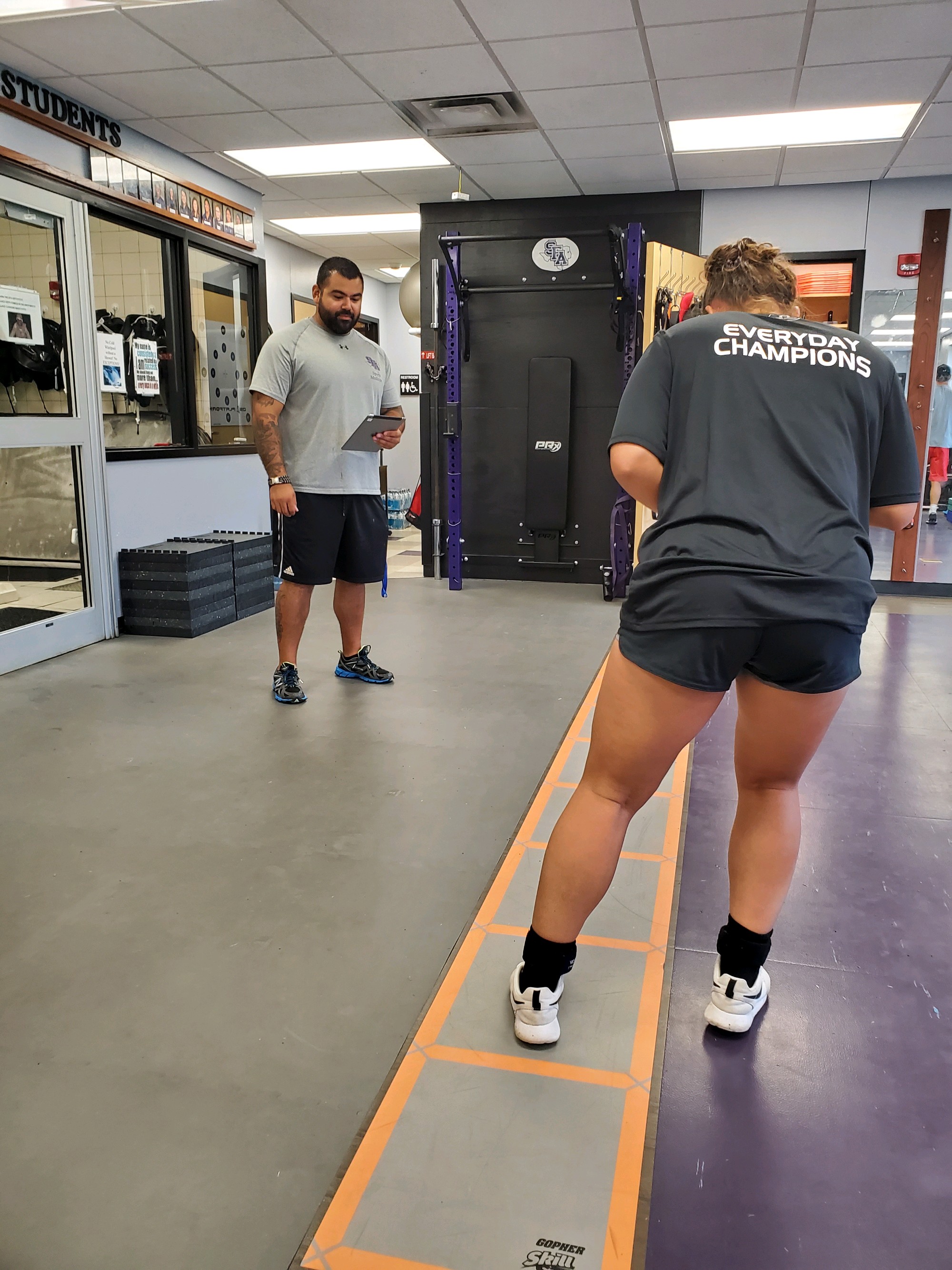 “We have been putting our non-injured athletes through our battery of tests to try and establish not only individual baselines, but also try and build a bank of data big enough to generate some norms for each sport and position.”

Equipped with IMU Step sensors, Arod administers a number of standardized tests to give him and the rest of the performance and medical staff an idea of how the athlete is progressing. For example, if an athlete wants to rejoin practice, they must perform above 85% of their healthy measures on each relevant test.

“Take an ACL for example, we have a number of different jump tests from single-leg hops, cross over hops, hops for distance and then we have a modified t-test, a shuttle run, etc.” Arod continues. “The data that we have collected up to now has given us the ability to set certain guidelines for the metrics generated by the sensors, step difference for example. During these tests, we have been putting the sensors on our athletes to make sure they are within the ranges we have developed. We know that if we administer those tests post-training session, the outcome is going to be different, but with the sensors, we are able to see HOW they get there. On those tests we want the athletes to be within 85% of their baseline before we start progressing them into aspects of practice. There is obviously a lot more things that we look at over and above these tests such as acceleration mechanics, load acceptance, quad and calf girth, etc. but in terms of direct performance measures, these are the tests we have identified as crucial.”

Arod is methodically making his way through his healthy rosters to build a rich profile of his athletes and when athletes inevitably do get injuries, such as the two ACL reconstructions he is currently working with, he puts that profile to good use.

“The data that we have collected up to now has given us the ability to set certain guidelines for the metrics generated by the sensors, step difference for example”

Putting the data to work

In the short term with his 2 post ACL athletes, Arod has seen incredible value in the data from a psychological and emotional point of view. In 2019 young athletes are used to data, used to numbers being generated for everything they do. Coming back from their long term injury is certainly no different.

“We have one athlete who we started using the sensors with 5 months post ACL reconstruction and from having this data and being able to track it over time has helped so much psychologically with her. After the first session using the sensors I looked at the asymmetry intensity data and immediately saw that although she was looking very balanced on the lower end intensities, we were actually not exposing her to high-intensity work to push the injured limb as we thought we were,” Arod admitted. “It’s also been great for me to present this data to the coaches. Our coaches are very analytical and having this data visualized in such a simple way can give the coach confidence that things are improving.” 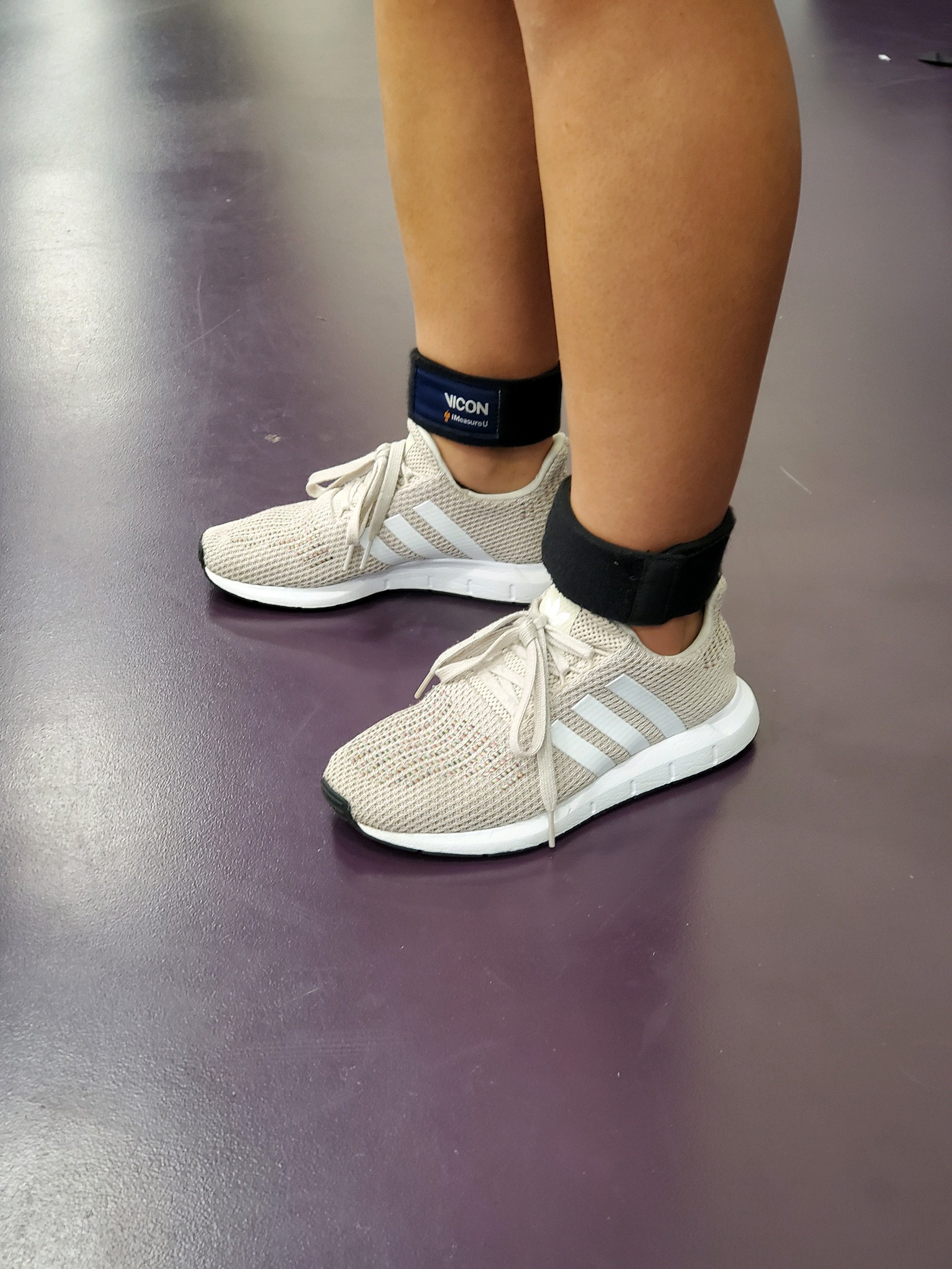 “We are planning on using the sensors as a prevention tool, not just a rehab tool“

From reactive to proactive

As Stephen F. Austin expand their provision of IMeasureU sensors, they have plans to extend the use of IMU Step to become a prevention tool, not just a rehab tool. With the smaller, more discreet Blue Trident sensor, Arod’s soccer athletes will be wearing sensors during practice on a consistent basis. This will also open up opportunities to track data longitudinally and intervene based on regular tests.

“We are planning on using the sensors as a prevention tool, not just a rehab tool. We would love to get into a position where every athlete is wearing sensors so it becomes a complete load monitoring system but right now we aren’t quite there yet,” Arod explains. “This will also allow us to administer a specific test that is run by the coaches and myself where we are aiming to track bone stimulus over time so we can then identify if there are significant changes to the data in a relatively controlled yet specific environment which may indicate a change in running strategy and therefore an increased risk of injury. The coach that I work with here has a very similar session every Tuesday, which makes it very easy for me to get a certain amount of control within the chaotic environment of practice.”

Instead of taking the traditional approach, and only focusing on injuries after they happen, Arod has been proactive and is building a database with his healthy athletes using IMeasureU so if they do get injured in the future, he has a clear picture of what ‘normal’ looks like for each athlete. This will not only give clear, objective progressions which the athlete can buy into but allow Arod to precisely program throughout the rehab process, reducing the chances of reinjury and speeding up the recovery process.

Click here to speak with an applied scientist and learn how IMU-Step’s inertial sensors can be used in your own rehab and baseline process.