Footnotes from the Field: Articles of the Week – October 04 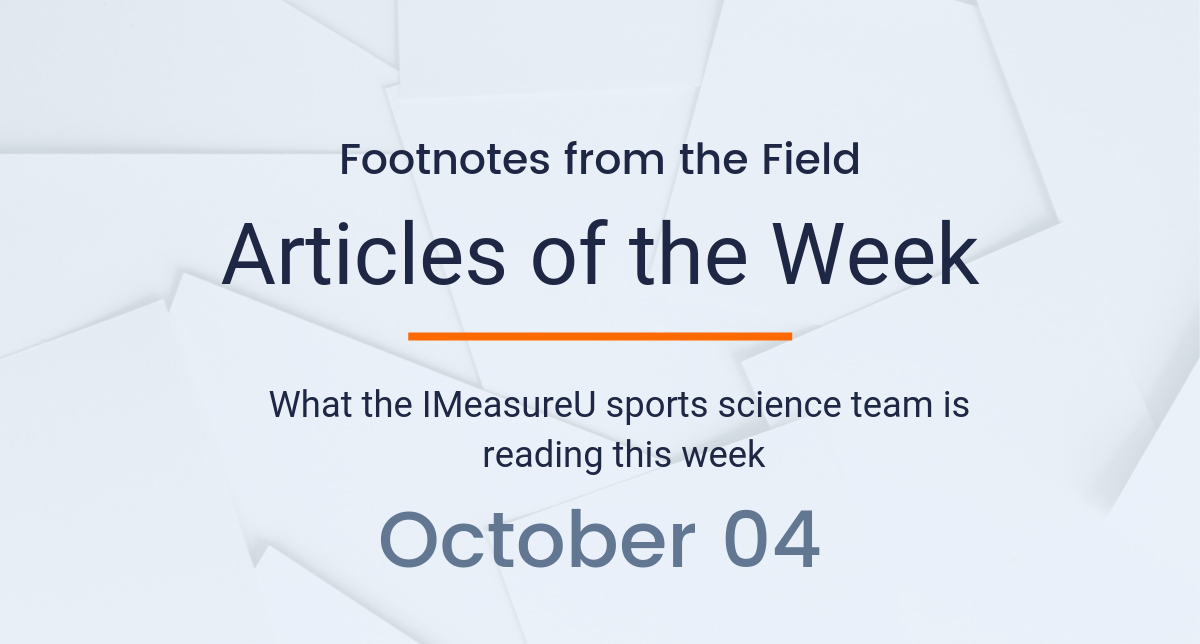 Muscle strength imbalances around the knee are often observed in athletes after ACL reconstructions and hamstring muscle injury. Therefore, it is crucial for clinicians to assess this throughout the return to performance journey. This study from the MDPI Sports open access journal by Eleftherios Kellis and colleagues aimed to investigate three hamstrings-to-quadriceps (H:Q) strength ratio types (conventional, functional, and mixed) in thirteen female athletes with a history of hamstring injury, fourteen basketball players following ACL reconstruction and 34 controls. The authors concluded that after evaluation of H:Q ratios, they did not reveal significant long-term impairments in balance between agonist and antagonist muscle strength after hamstring injury or ACL reconstruction surgery. This was observed for conventional, functional and the mixed H:Q ratio. Athletes with a history of previous ACL surgery or hamstring injury displayed significant isokinetic strength deficits of the knee extensor and flexors compared with uninjured athletes. This may give practitioners an insight into where they may need to spend their time with athletes post ACL or hamstring injury.

The next article comes from author Nicky van Melick and colleagues in the British Journal of Sports Medicine. This review article aimed to develop an evidence statement for rehabilitation after ACL reconstruction. The conclusions drawn from the authors were that rehabilitation after anterior cruciate ligament reconstruction should consist of three phases, which are goal-based rather than time-based. They also stated that an extensive test battery, including at least a strength test battery, a hop test battery and measurement of quality of movement, is needed to determine the moment of return to play.

This blog article comes from Jace Delaney who is Director of Performance & Sports Science at Oregon Ducks Football. This article questions some of the research (his own) and practice that is out there around determining peak demands. The article explains how this has up to now only been done using metrics that are one-dimensional which is very different to what performance actually looks like. Towards the end of the article Jace presents how he is now using GPS systems to analyse data which includes forwards, backwards, left and right to give a clearer picture of the running demands. A very interesting article for anyone using GPS to guide training design.

Our fourth article comes from Christian Clermont and colleagues at the University of Calgary in the Human Kinetics Journal. This article aimed to use wearable technology data to quantify alterations in subject-specific running patterns throughout a marathon race and to determine if runners could be clustered into subgroups based on similar trends in running gait alterations throughout the marathon. This study presented a novel method to investigate the effects of fatigue on running biomechanics using wearable technology in a real-world setting. Results suggested that recreational runners with higher age–grade performance scores had less atypical running patterns throughout the marathon compared with runners with lower age–grade performance scores.

The last article in this week’s articles of the week comes from Angeliki-Nikoletta Stasinaki and colleagues in the MDPI Sport Journal. The aim of the study was to investigate the rate of force development (RFD) and muscle
architecture early adaptations in response to training with fast- or slow-velocity eccentric squats. The authors made some interesting findings, the main one being that fast eccentrics (less than 1s) with 70% of 1RM have greater benefits for rate of force development and fascicle length with near equal strength gains compared to 90% of 1RM slow tempo eccentrics (4s lowering).