How to Improve Patient Outcomes with Objective Data

“How long am I going to be out?” Goal-based rehabilitation combined with objective data is helping to redefine the return to play process. 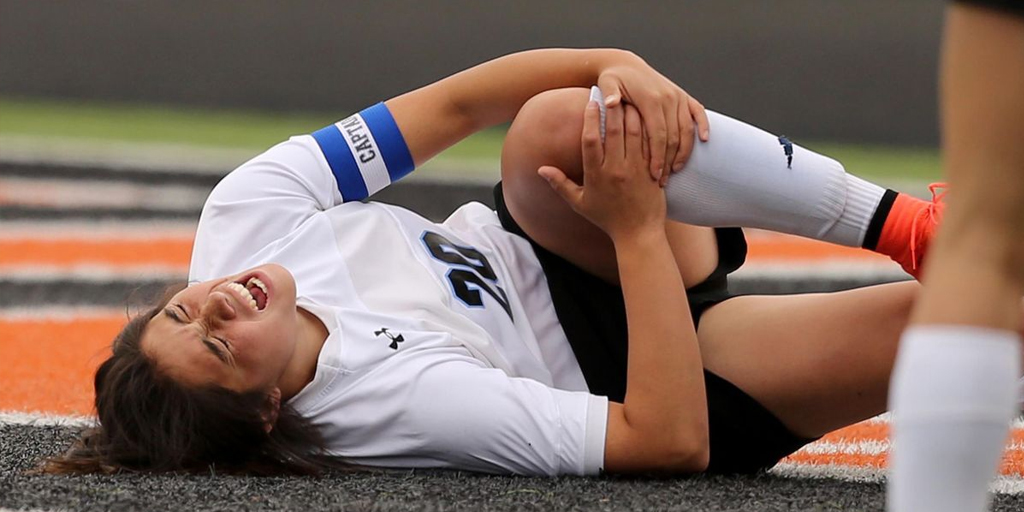 After an athlete is hurt, this is often the first thought on their mind. That question is then echoed through the strength and conditioning staff, technical staff, management, even general managers and owners. This exact question has been reinforced by the traditional, time-based rehabilitation approach used by most practitioners. Time-based rehabilitation protocols dominate the scientific literature, describing overarching windows for progression based on population and injury.

The explosion in wearable technology, and the subsequent advances in accuracy and reliability has offered a way to objectively track athlete movement throughout the rehab progress.

Take ACL reconstruction as an example. Time-based protocols are predicated around the remodeling of the graft, however, there is still uncertainty about the time schedule of the human remodeling process. In addition to this uncertainty, there are also many other factors to consider in addition to simply the site of the injury. Individual differences in strength, mobility, flexibility, and neuromotor learning all contribute to overall tissue remodeling. The complexity of the human injury repair process underlines the importance of a move away from time-based rehabilitation to a more objective, goal-based rehabilitation process. A review article published in 2016 in the British Journal of Sports Medicine by Nicky van Melick and colleagues aimed to develop an evidence statement for rehabilitation after ACL reconstruction (ACLR) and concluded that rehab post-ACLR should be goal-based rather than time-based. Further research by Grindem (2016) concluded that time (beyond 9 months) did not provide a significant reduction in the risk of knee reinjury and therefore time alone is not sufficient for determining readiness for sports participation. In light of this research around the ineffectiveness of solely time-based rehabilitation protocols and a move towards outcome based rehabilitation, we now need to consider the validity and reliability of those outcomes. Often, these outcome targets are subjective in nature, however to reach the gold standard and improve patient outcomes, we need objective data.

One of the reasons time based protocols are the de facto standard is that there hasn’t been a viable alternative. At least not until recently. The explosion in wearable technology, and the subsequent advances in accuracy and reliability has offered a way to objectively track athlete movement throughout the rehab progress. With objective measurements, goal-based rehab transitions from an art to a science.  Andrew Gray, Physical Performance Manager at the Cronulla Sharks in the NRL, had the objective goal of reducing asymmetries over the course of club captain Wade Graham’s ACL rehabilitation process. Andrew and the staff had a good idea what ‘normal’ symmetry was like for Wade and used data from IMU Step lower limb tracking to objectively track his rehabilitation process. “IMU Step has allowed us to track the extent of any asymmetry fluctuations so we can progress our drills at the right rate. We were able to communicate this asymmetry improvement with Wade which gave him reassurance that we were making progress.” With the new wave of wearable sensors, practitioners are starting to realize they can improve patient outcomes with objective data. 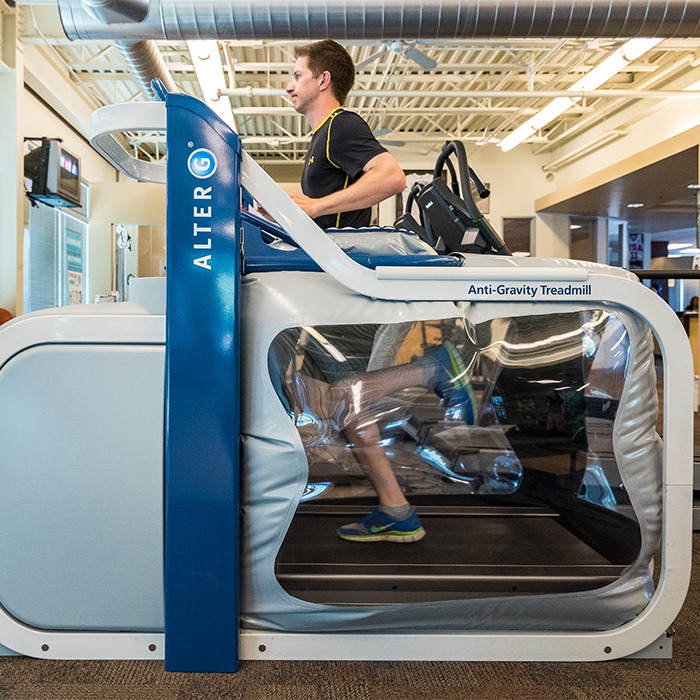 Wearable technology has also shed some light on the effect of older rehab technologies such as AlterG treadmills, which aim to reduce the step impact of patients are they progress through the return to play process. Percentage of bodyweight reduction is used to plan this progression, and the assumption is that lighter weight equals less load. However, additional technology, such as inertial measurement units (IMUs), have shown that isn’t necessarily true.. “As we know from measuring the load on an AlterG, they always overestimate the support which is provided to the athlete,” says Dean Golich, sports scientist and coach to 2016 Ironman 70.3 World Champion Holly Lawrence. “and they always underestimate the speed contribution to the overall load.”

Traditionally, the magic number has been 9 months for full ACL reconstruction recovery, but some athletes such as Zlatan Ibrahimovic, have returned in 7. In contrast to that, Dr Matt Jordan of the Calgary Sports Institute has investigated skiers in the months following their ACL reconstructive surgery. He found that in some cases asymmetries are still present up to 24 months post-surgery. This clearly indicates that time is not the only factor to consider. Think of goal based rehab like a progression through school, we know roughly where you should be at each age, but test results can either move you up a grade or hold you back. Not everyone progresses at the same rate.

Objective data is not only essential during the return to performance journey, but before it too. Proactively collecting benchmark data can remove some of the the guesswork if and when injuries do occur. Building a database of healthy normative data, like Alejandro Rodriguez at Stephen F. Austin University, is well worth the investment and time. “We have been putting our non-injured athletes through our battery of tests to try and establish not only individual baselines, but also try and build a bank of data big enough to generate some norms for each sport and position.” This data also allows for a truly individual, goal-based return to performance protocol with a clear baseline and objective progression markers. 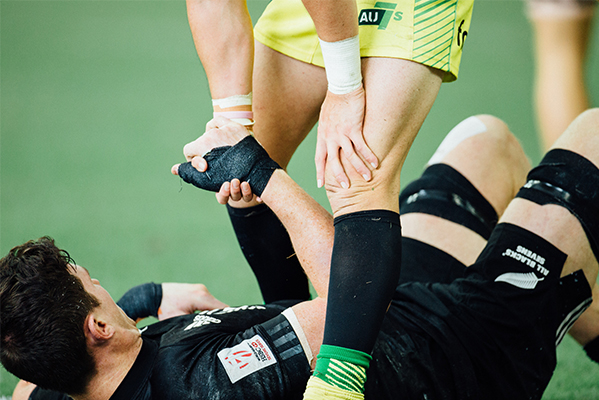 Individuals progress and adapt in different ways. By using reliable and valid data, practitioners can more confidently guide each athlete’s return to sport and reduce the chance of reinjury.

This proactive mindset pre-injury can also be extended to creating ‘drill catalogs’ which provide a deeper look into what individual drills look like for a fit player so they can be used to predict drill impact on an athlete. For the Cronulla Sharks academy, this drill catalog was developed by Sports Science and Analysis Manager, John Davey, and passed down from the senior squad so academy staff had an idea of loading patterns across different drills.

It is clear from the scientific literature that there is a need for more objective outcome measures when it comes to rehabilitation of injury. Objective data helps by:

Objective data is also crucial during the integration of the athlete back into training. Rather than a traditional ‘yes’ or ‘no’ question at the end of the rehabilitation process, the journey should be seen as lots of mini steps on the way to return to sport. Planning the progression from a controlled training environment to activities that are totally uncontrolled is easier to manage with objective data. Without this gradual integration back into sport, athletes may have a lack of confidence and a fear of reinjury. Traditional tests such as hop tests, jump tests, or functional movement screens may provide interesting information, however they will fall short if they are being used to monitor how effectively an athlete can handle an increase in training and competition workloads (Dingenen & Gokeler, 2017). With this is mind, tools like the acute:chronic ratio can be used to help clinicians avoid spikes in actual workload, which may compromise the progression of the injured athlete.

So, how can we improve patient outcomes with objective data? By incorporating objective data into a goal-based return to play process, we can progress athletes safely and individualize their rehabilitation. Individuals progress and adapt in different ways. By using reliable and valid data, practitioners can more confidently guide each athlete’s return to sport and reduce the chance of reinjury.

Interested in how you can improve your patient outcomes with objective data and inertial sensors? Get in touch with a sports scientist to learn more.