Take an in-depth look at the best wearable technology for patients recovering from lower limb injuries. 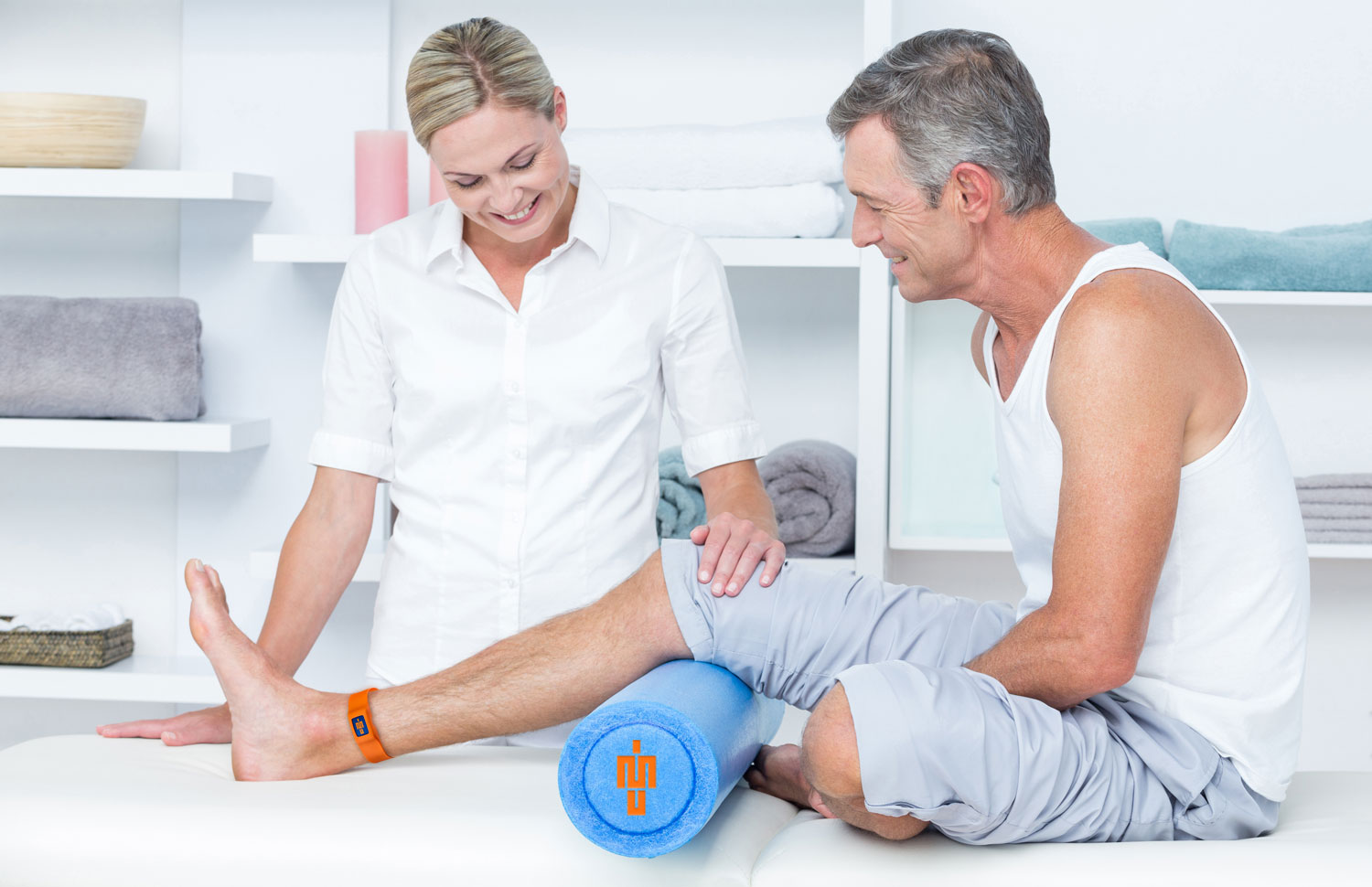 Introduction: Inertial sensors have been around for a while. They are even in your phone. In elite sport, they are utilized to track the movements of athletes around a court or around a field. They are made up of accelerometers to measure force and acceleration, gyroscopes that measure rotation, and a magnetometer that gives an indication of body orientation.

While its most popular use in elite sport is qualifying readiness and fatigue, in a clinical environment, inertial sensors can give an incredible amount of information on where a patient is at in their rehabilitation journey. Campbell Hanson at Square One Physiotherapy in Sydney is using inertial sensors to ensure that the amount of load prescribed for patients was appropriate. “We wanted to start getting our heads around how we load the bone to get an optimal healing response with what we know about bone cell turnover,” says Campbell. “We also wanted to know how we load to get a response and also have some idea of what the overall bone-load is, so that we don’t push them too far.”

Inertial sensors collect 1,000 to 1,600 data points per second which reveals a huge amount about what is going on at the source of impact (the foot when it hits the ground). This data is incredibly useful to a clinician who will be able to take that data, benchmark it against a ‘norm’, and plan a patient’s rehabilitation more effectively.

When to use; Inertial sensors can offer incredible value to clinicians when they are returning patients from injury. The planning of rehabilitation can be more data driven and because they record data straight to the device, they can be used indoors, for long periods and even underwater. Clinicians can use inertial sensors while a patient is with them or they can send them home with the patient for some ‘in the wild’ data collection. This is a huge benefit of inertial sensors.

Drawbacks: There is a lot of data that is generated with inertial sensors that in some cases can be overwhelming. However, with software like IMU Step, custom dashboards can be generated for clinicians so it’s user-friendly and does not become a burden. Some options restrict you to specific protocols but while some work in many environments.

Introduction: In the past, plantar pressure devices were cumbersome, wired devices that were only fit for use in a lab. However, in the last few years a variety of plantar pressure measurement systems have been developed. This new wave of devices allows measurement in unrestricted environments where continuous monitoring during daily life for long periods of time is needed. The ideal device should be –

Some insoles offer as many as 960 sensors per device, but typically you will not need that many for gait analysis applications. Products differing in size, sensor number, sensor type, and sensor layout lead to various levels of accuracy and reliability. Unlike inertial sensors, many of the commercially available solutions only capture data at 150Hz (150 data points per second). This may still seem like a lot but when analyzing high speed movements, such as ones that occur towards the end of rehabilitation, more granular data is required to gain a full picture of a particular movement.

When talking about plantar pressure technology, Antonio Robustelli emphasized that force (data collected on a force plate, for example) and pressure are two very different things. However, they should be used together.

“It is important to note that they are two complementary technologies. Force information and pressure information should be used together in a matrix to better understand human performance and human movement.”

When to use: Plantar pressure devices can be used in a variety of environments due to their wireless nature. Some manufacturers advise against getting them very wet which may put off users who are used to trail running, water therapy, etc.

Drawbacks: Given the variety of fits of running shoes, getting multiple devices in a clinical setting may make this choice a very expensive one. A patient may have bought size 6.5 running shoes with a slim fit. Is the plantar pressure insole going to fit? And what about the size 11 wide-fitting shoe. Although these devices may provide some excellent data, for a clinical setting, the practicalities of buying a large number of sensors will be a barrier to many.

Daily tracking devices are everywhere. The boom of devices like FitBit has been taken over by the likes of Apple who have seamlessly integrated that technology into their wearable ecosystem. Despite not being very sexy when it comes to ‘recovering patients’, these trackers can provide some really interesting information when it comes to daily activity. If a runner has issues with their right ankle but they’re a nurse who’s on their feet all day, how can we get a good idea of time on-feet? An Apple watch, Garmin watch, or FitBit is going to do exactly that. Research has suggested that there is still quite a large variability in the quality of step count data from devices such as the Garmin, Polar, Samsung and FitBit. The issue often lies when the person wearing the device is walking slowly, reducing the device’s ability to identify steps. In some devices, errors of up to 15% have been found.

The recovering patient entering a clinic will no doubt be wearing or have worn such a device in the past so may be used to the data they provide. However, it is our job as clinicians to make that data actionable. This is often what is lacking with the devices mentioned above. They provide the information but have very few recommendations based on the data. However, there are also devices like Whoop which do make recommendations but these are often based on algorithms, and inferences are made to create a ‘yes’ or ‘no’ answer for the end-user.

When to use: These devices can be great to use when clinicians are trying to investigate general activity patterns of patients when they are away from the clinic. Patients may already own a device themselves which makes for easy setup.

Drawbacks: The reliability of these devices is best suited for summary metrics per day and the accuracy and data integrity must be taken into consideration when making decisions off the data.

Despite the problems faced by team sports, heart rate monitoring does have many positives for the recovering patient. It’s easily understandable and highly prescriptive. Clinicians can prescribe intensities based on percentage of heart rate maximum, allowing patients the opportunity to easily manage their load when recovering from injury.

We do need to be aware of the reliability of such devices, however. For a long time, heart rate straps with an accompanying watch were the only options if you want to monitor heart rate. The introduction of wrist-worn devices such as the Apple Watch or Garmin watch has made them much more integrated within everyday life. A downside to that is often reduced accuracy. During low heart rates, wrist worn devices are comparable to chest strap devices. However, their accuracy decreased as activity intensity increased. Some devices overestimated heart rate by 6 bpm and others underestimated by 2 bpm. This may be an issue if tight restrictions were being set for elite athletes, however, for non-athletic patients, this reduction in accuracy is potentially acceptable.

When to use: Heart rate monitors can be used by clinicians when they want to easily prescribe exercise intensity for their recovering patients. They are relatively cheap and patients will often have them already which can help with buy-in

Drawbacks: Accuracy can be an issue, especially with wrist-worn devices. When managing the recovery of team sport players, monitoring high-intensity interval training can be a challenge with heart rate monitors due to the impact short, intense work has on the cardiorespiratory system.

There are a number of cost-effective wearable devices that can be used by clinicians to help recovering patients. For in-depth information on the loading of patients, inertial sensors are a fantastic choice. For global, less precise tracking, heart rate monitors or activity trackers may be a suitable option.

The best wearable technology for recovering patients under your care will ultimately depend on what specific problems you are trying to solve since each one offers different advantages.

Smart Insoles will give information on pressure, vs force

If you’d like to speak with a sports scientist to discuss what solution might be best for you, get in touch with us at IMeasureU.